Spring is almost in full bloom now and on a fine morning recently I detected the aroma of one my favorite plants, Gorse, or Whins, as it is known as locally (also known as Furze). During its’ Spring flowering period, it now seems to be in flower for much of the year, this native shrub gives off the most amazing coconut smell. Such an exotic surprise considering how unfriendly and dour this plant appears with its spikes and thorns. Its’ vibrant flowers transform our countryside into a brilliant spectacle of yellow, truly one of the Season’s most beautiful sights.
Gorse is not just a pretty sight though. Traditionally it is also linked to
medicinal uses as the following piece of folklore informs us….

'Get a few handfuls of the yellow blossoms of the furze and boil them in water.
Give the water as a dose to the horse and this will cure worms'.
(Cited in http://www.wildflowersofireland.net/plant_detail.php?id_flower=109)

The famous homoeopath, Dr Edward Bach identified Gorse as a remedy for uncertainty. Apparently when used as a herbal remedy Gorse helps persuade us to see things in a different light and thus find a new way forward.
(Source: http//www.bachcentre.com/centre/38/gorse.htm)

In Irish mythology gorse was also used ceremonially in torches and wreathes for the Celtic festivals of Imbolc (St Bridget’s Day) and Bealtaine, a "spring time festival of optimism" held at the beginning of May.
(Source: http://ohnthegorse.blogspot.ie/p/crafts-and-fuel.html) 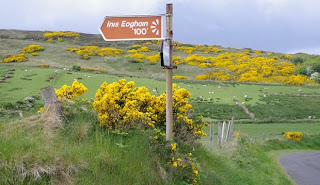 Photo caption 1: There is more to the humble Gorse than you might imagine. 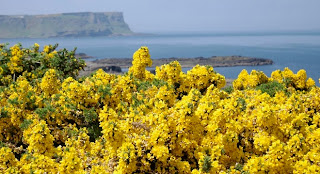 Photo caption 2: Can you feel the optimism?

There is more to the humble Gorse than you might imagine. Considered an invasive pest by many today, it is very much part of our cultural heritage and was considered a valuable resource by our ancestors due to its many uses. Like the Cherry Blossom Festival in Japan, perhaps it’s time we began to celebrate our native Gorse and the delight it brings us each Spring.

Posted by Solas Ireland at 08:37 No comments:

Posted by Solas Ireland at 08:11 No comments: